On Tuesday Trump took a race-baiting excursion to Kenosha, Wis. He used the opportunity to wield his demagogic broad brush, labeling racial justice protesters as terrorists and seeking to equate criminal justice reformers and opponents of police violence as soft on crime, as panderers for anarchism, and himself as the only one capable of imposing “law and order.” At the GOP convention last week, this doddering old man was ludicrously presented as the “bodyguard of western civilization.” Noise, noise, and yet more noise.
Ad Policy

Make no mistake, with stunning rapidity Trump has ratcheted up the stakes. In defending Kyle Rittenhouse, the 17-year-old vigilante who killed two Kenosha protesters last week, he has begun prepping his supporters to take up weapons to defend him (under the guise of defending law and order) and gambling that he can, by positioning himself as a bulwark against anarchy, convince millions of voters in swing states like Pennsylvania and Wisconsin to disregard his record of failure, corruption, and abuse of power.

But you don’t even have to scratch the surface to find that record of failure, that cruelty-as-a-governing-principle, still visibly on display. Take this week’s stunning decision to deny US participation in a globally coordinated effort to produce and distribute a Covid-19 vaccine. Under the guise of “America First,” this policy is once again making America isolated. First, it makes it that much harder for the poorest people and nations to access the vaccines that will be developed in the coming months. But it also makes it all but impossible for the US health system to access supply chains developed as part of that coordinated international strategy. After all, if America tells the rest of the world to go to hell, the rest of the world will respond in kind. That’s Human Behavior 101.

In addition to demagoguing his way toward the election and blaming the rest of the world, along with Biden-loving, black-clad, airplane-hopping anarchist agitators, for America’s woes under his watch, Trump and his state-level minions are doing everything in their power to disenfranchise voters. The ACLU’s Georgia chapter released a report this week detailing how, in late 2019, the state wrongly purged some 200,000 voters from its rolls. In normal times, revelations of an orchestrated campaign of voter suppression in a key swing state would be the headline of the week. In these debased days, it’s barely a blip.

So too would Trump’s felonious suggestion that his supporters vote twice, once by mail and then, just to be on the safe side, in person as well—a strategy The New York Times reports he has been discussing with aides for several weeks. Trump also accused Joe Biden of being on “enhancement” drugs designed to boost his acumen.

If you’re thinking this will be the straw that breaks Attorney General Bill Barr’s backbone of support for Trump, think again: In a CNN interview shortly after Trump’s comments, Barr repeated Trump’s claims that vote-by-mail was “playing with fire” and argued that Trump was legitimately pointing out how to stress-test the system. In that same interview, this odious Führer-sycophant also refused to rule out using the Justice Department to deliver an October surprise, such as indicting people connected to the initial FBI investigation into the 2016 Trump campaign’s Russia connections.

But while Trump and his house-pet attorney general gin up chaos and noise, in California—where in the 1990s then-Governor Pete Wilson ran for reelection on a tough-on-crime and anti-immigrant campaign every bit as demagogic as the one now pushed by Trump—legislators were sending a powerful Signal this week about different, smarter, more mature ways of doing politics. 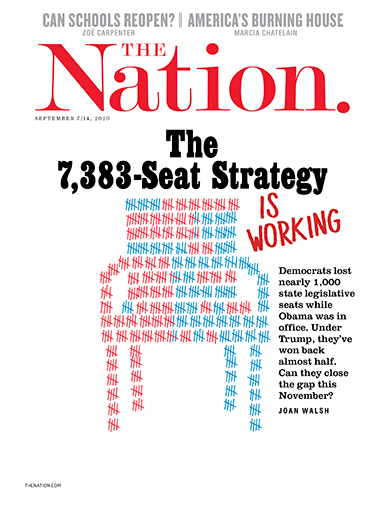 Monday marked the end of a legislative session that—despite some last-minute wobbles that saw a number of important police reform bills die on the vine, including one, supported by the ACLU and other civil rights groups, that would have decertified violently abusive cops—became a banner year for criminal justice reformers in the Golden State. Democrats, using their supermajority in both houses, along with support from a few Republicans, pushed through a raft of reforms that would have been unthinkable only a few years ago.

“It happened very fast. In a number of hours we were able to push it through both houses in a very short time,” says Democratic Assembly Member Ash Kalra, who represents the San Jose area and whose Racial Justice Act was one of the most ambitious reforms of the session. The act, which passed with just hours to spare—and with the support of moderate Democrats who have in previous years blocked criminal justice reforms—allows defense attorneys to challenge convictions and sentencing based on patterns of systemic racial discrimination. If signed by Governor Gavin Newsom, it will empower judges to void enhanced sentences if, for example, a defense attorney could show that a Latino client was likely to have received a gang-sentencing enhancement because of his or her race.

California incarcerates African American men at almost 10 times the rate for white men—a disproportionality even more extreme than in Southern states, according to Sacramento-based criminal justice reform lobbyist Glenn Backes, who refers to the Golden State as “Mississippi with palm trees” (he counts among his clients the Ella Baker Center for Human Rights and the Drug Policy Alliance). Kalra’s legislation will pave the way for huge changes. It passed, the Assembly member says, because, following the killing of George Floyd, a critical number of his colleagues could no longer turn a blind eye to patterns of systemic racism in law enforcement. “Everything turned on its head,” Kalra explains. “It was amazing to see that transformation. Black Live Matter and millions marching in the streets gave new energy” to the reform momentum in California.

In addition to Kalra’s bill, Senator Holly Mitchell, one of the leading social justice reform politicians in Sacramento, estimates that more than 20 significant pieces of legislation passed this session that will move the needle on prisons and policing. These include bills that remove investigation of fatal police shootings of civilians from local DAs, instead requiring that state prosecutors take on such cases; that prohibit police use of choke holds; that establish county oversight committees for sheriffs’ departments; that provide for the closing of two prisons, at a cost saving of several hundred million dollars; and that allow inmates over the age of 50 who have served at least 20 years behind bars to take their cases before parole boards, even in situations where their original sentence renders them ineligible for parole. “I think it’s a very successful reform year,” says Mitchell, whose enthusiasm is only slightly tempered by the fact that the police unions successfully blocked passage of the decertification bill for abusive police officers.

For the past four years, California has been a political and rhetorical foil for Trump. It’s tempting to think there must be something in the state’s water that renders populace and political leaders alike inherently progressive, but of course that’s not the case. In 1993–94, when Governor Pete Wilson was pushing draconian “three strikes” sentencing and a vast prison-building program, and when the California Correctional Peace Officers Association was one of the most powerful unions in the state, California veered hard-right on criminal justice and other issues. It took years of grassroots organizing, get-out-the-vote campaigns among the groups most affected by mass incarceration, and community engagement work to change that narrative and bend the state’s politics in a more progressive direction.

Now, a generation later, all that hard work is bearing fruit. A state that once prided itself on the unforgiving nature of three strikes and other such laws is now recreating its criminal justice system and, by extension, its broader political culture.

“There were some policing bills that didn’t get to the governor’s desk,” says Anthony DiMartino, government affairs director at Californians for Safety and Justice. “But the things criminal justice reformers passed were tremendous.”

There are better ways of doing politics than Trump’s toxic blend of lies and cruelty—as California’s legislators showed this week. In two months, this country will face a choice that will shape it for decades. It’s an all-hands-on-deck moment. Let’s get busy.