Greene County, a rural stretch of central New York, is home to few lawyers—and even fewer who take on time-consuming and emotionally wrenching child welfare cases. So Monica Kenny-Keff, who runs a solo family law practice in Catskill, not far from where she grew up in the village of Tannersville, often juggles an unmanageable number of clients. Her clients are poor: Nearly all rely on the county’s indigenous defense system to provide free counsel.

This story was published in partnership with New York Focus, an independent, investigative news site covering New York state and city politics. Sign up for their newsletter here.

Defending indigenous clients in a rural area comes with particular challenges. Greene County has little public transportation—on some routes a bus might come around once a week—and some of Kenny-Keff’s clients don’t have a car, which makes scheduling in-person meetings difficult. Remote communication can be tricky too: The county’s rolling hills tend to swallow up cell signals, and Internet service is often spotty. Kenny-Keff makes herself available “pretty much 24/7,” because the needs of people embroiled in family court can’t be neatly confined to business hours.

Parents facing accusations of neglect or abuse in New York have a legal right to counsel, but the state leaves it to each county to figure out how to make good on that promise. The quality and depth of legal help available to an indigent parent varies across the state, depending on each county’s financial capacity to provide free legal services and its political will to do so. Rural counties often fall short on both counts.

And the program is getting worse: The number of family lawyers has precipitously declined in rural counties across New York over the past decade, data obtained by New York Focus shows. That has left rural parents with increasingly inadequate legal representation, which can lead to unwarranted foster care placements and even permanent loss of parental rights.

Indigent defense in New York state is provided through three different schemes. A county can establish a public defense office, contract with a nonprofit provider, such as Legal Aid, or hire private attorneys to act as ad-hoc “assigned counsel.” Most counties use a hybrid of those arrangements, and all but a handful of rural counties rely on assigned counsel to defend at least some indigent parents in family court.

By law, assigned counsel are paid no more than $75 an hour, a rate that has not changed since 2004, with fees capped at $4,400 per case. (Assigned counsel in federal cases are paid more than double that rate, by contrast, at $158 an hour.) With such meager wages, family defenders struggle to pay for support staff and must take on dozens of cases at once in order to make ends meet, leaving them limited time for each client.

Ten bar associations filed a lawsuit against the state last year, seeking to raise fees to $150 an hour. The associations argued that overburdened lawyers “frequently do not have time to perform many of the tasks that are critical to effective representation,” including reviewing documents, consulting with clients, and making sure they are receiving needed services. Meanwhile, the alleged suit, children “languish in foster care” and parents are denied visitation rights while courts scramble to find assigned counsel and attorneys scramble to triage their cases.

The situation is somewhat different in criminal court. As a result of a lawsuit settled in 2014 and legislation that followed, the state established caseload standards for indigent criminal defense and provided supervision and training for lawyers and access to staff such as paralegals, social workers, and investigators. Crucially, the state committed to picking up the costs of these improvements.

But those reforms excluded family courts, where low pay and excessive caseloads have led some attorneys to quit taking assigned clients altogether. Few new practitioners are taking their place—especially in rural regions, which are increasingly becoming “legal deserts.”

Those figures reflect an exodus of family attorneys in rural areas over the past decade. 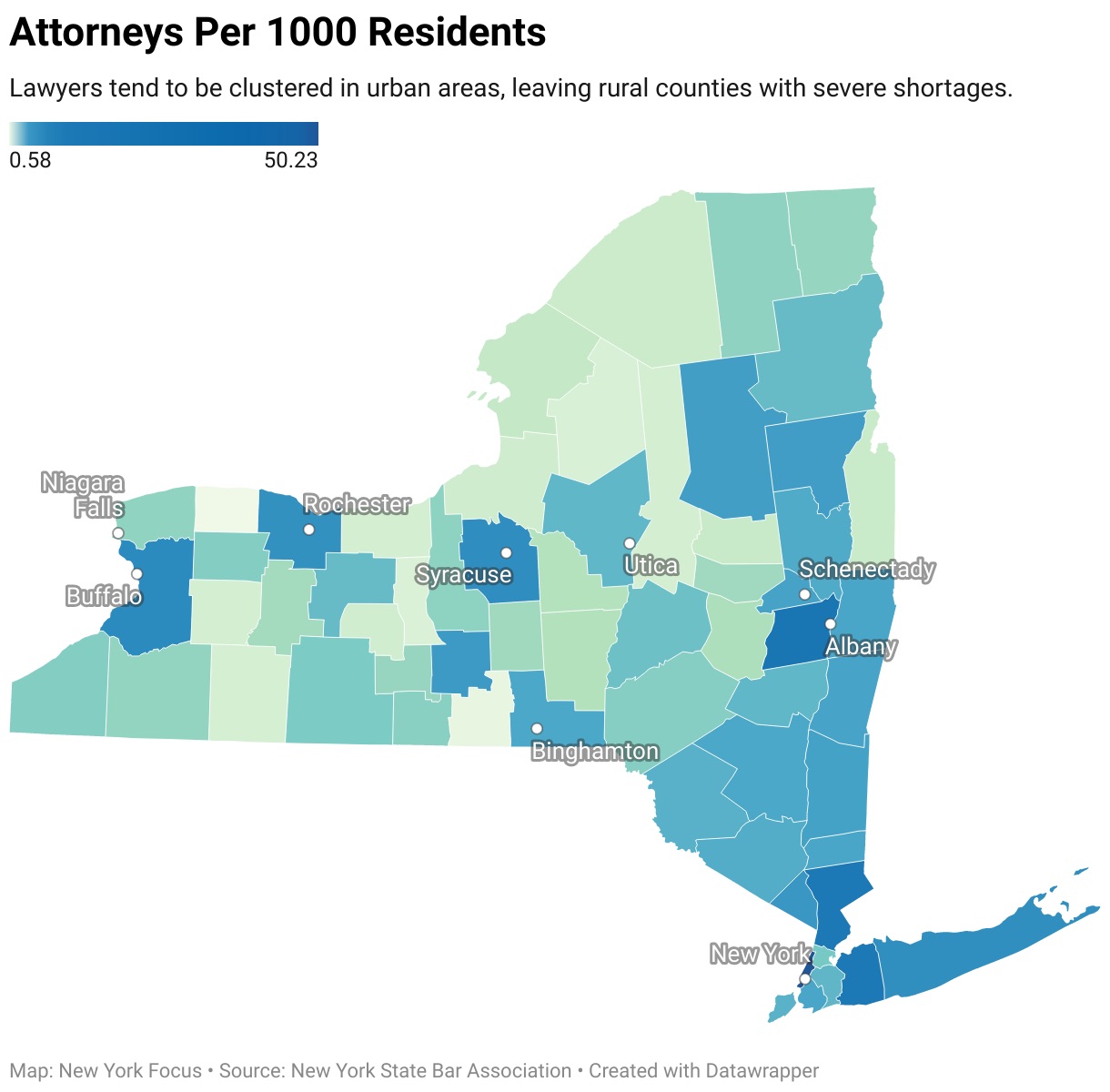 Data from eight rural counties, compiled by the Third Judicial Department Appellate Division and shared with New York Focus, shows that the number of lawyers serving on Attorneys for the Children panels have diminished dramatically in recent years. In six of the eight counties, the panels have lost more than helped their attorneys over the past 10 years. Hamilton County’s panel has lost three quarters of its attorneys.

Less rural counties–including Albany County–have diminished panels too, but the declines are not as great.

The Appellate Division has not compiled data on parent attorneys, but Betsy Ruslander, the director of the division’s Office of Attorneys for Children, pointed to anecdotal evidence that suggests the situation may be even more dire for lawyers representing parents.

In Greene County, where Kenny-Keff practices, the assigned counsel panel numbered 16 in 2016. Over the next five years, it lost half its lawyers—and not a single new one signed on. That finally changed in January, when two lawyers joined the panel, but that brought its size up to just 10.

In Hamilton County, whose population of just 5,107 makes it the least densely populated county east of the Mississippi, there were about 25 attorneys on the assigned counsel panel in 2018, some of whom handled both criminal and family court cases. Over the next two years, that number dwindled to just five or six lawyers.

“Hamilton County is a vast geographical territory with little towns dotted through it, and a rapidly declining attorney population,” Sterling Goodspeed, Hamilton County’s public defender, said. “We have a lawyering crisis here.”

Without state intervention, the shortage is likely to get worse over the next decade: A 2018 survey of rural New York lawyers found that more than half were age 55 or older, and there won’t be enough younger attorneys to replace them.

Parent’s “Stuck in a Labyrinth”

Most of the cases that end up in family court involve charges of neglect rather than abuse, and neglect cases are bound up with poverty.

“The crime they’ve committed is the bad luck of being poor in the United States,” says Kate Falconer Woods, who represents parents in Monroe and Wayne counties. Parents may be accused of educational neglect if their children miss too much school. During the pandemic, families have been investigated when their children haven’t had Internet access for remote learning. Parents with unstable housing and those whose children go hungry also attract the attention of Child Protective Services.

And once CPS comes around, says Joanne Sirotkin, an attorney at Legal Services of the Hudson Valley, families get “stuck in this labyrinth”—usually without a lawyer to guide them through.

In most cases, indigent clients consult with a lawyer for the first time at their first court appearance, sometimes just minutes before the proceedings begin. But that may be weeks or months after CPS begins an investigation into a family. In that time, parents and their children may have been interviewed by caseworkers, examined by medical and mental health professionals, instructed to attend substance abuse or mental health counseling, and submitted to drug tests—all without advice of counsel.

A parent navigating a CPS investigation without a lawyer, Chelsea Carter of the Ontario County public defender’s office told a judicial commission, “makes admissions, signs releases, and oftentimes, even consents to the placement of their children in foster care without having been properly advised of the consequences.”

Sometimes parents aren’t even assigned a lawyer in time for a removal hearing. Between 2015 and 2018, court records show, in 12 percent of proceedings where children in New York State were removed from the parent at an initial appearance and placed in foster care, the family had no lawyer present.

Woods argued that a lack of counsel has even higher stakes in family court than in criminal court. Jail time is bad enough, she pointed out, but in family court the result of belated defense could be “losing your child forever.”

Family defense attorneys say that teaming up with social workers and advocates would lead to better outcomes for children and parents. “The CPS caseworker in theory is supposed to be working with these parents to help sort things out…[but] this is the person who is also going to be testing against them in court. There’s an inherent conflict that I think is impossible to resolve,” Woods said.

But having a social worker on the defense team would be an enormous advantage, Woods said. “If I had a social worker working with me, not only could that person be helpful to my client, but then I also have my own witness to testify in court about what progress my client has made, or what difficulties they’ve faced and how they’ve overcome them. But I don’t have that.”

New York City’s family defense system does involve social workers. Since 2007, the city has contracted with nonprofit organizations such as Bronx Defenders and Brooklyn Defender Services to represent parents in child welfare cases. These agencies have pioneered an interdisciplinary approach: Clients get help from social workers and parent advocates who help them navigate the system. Studies have shown that children whose parents receive holistic representation spend less time in foster care and move to reunification more quickly.

New York City’s system is considered the gold standard in family defense, and has served as a model for programs in other states—and recently, just north of the city as well. In Westchester County, Legal Services of the Hudson Valley won a state-funded grant to launch a demonstration project that offers interdisciplinary legal assistance and takes the city model one step further: clients have representation at the start of an investigation, long before a parent must show up in court with the threat of foster care looming.

“Separation is always traumatic, no matter what the circumstances,” says Joanne Sirotkin, who is attorney-in-charge at LSHV’s White Plains office. “It’s traumatic for the children and it’s traumatic for the parents. Having multidisciplinary legal representation at the onset of an investigation can lessen the extent of trauma to the family.” So far, the majority of the agency’s early investigation cases haven’t ended up in court, meaning that more children remain with their families.

Angela Burton of ILS, the agency that administered that grant, hopes it will be replicated across New York. Another model program is getting under way in Monroe County.

​​Meanwhile, across New York’s wide rural landscapes, more lawyers are reaching retirement age and wondering if anyone will be around to do the work they do when they close up shop. When Sterling Goodspeed, the public defender of Hamilton County, hung out a shine in North Creek in neighboring Wayne County in 1991, he became the fifth lawyer in town, and the youngest. Now he’s the only one left.

“Students are not attracted to rural practice,” Goodspeed said. “Lawyers today are trained to be more and more specialized, but in these small villages you need lawyers who can do everything.”

“I’m 59 years old. What will happen in 10 years?” he asked. “Who will be around to take care of the people in these small towns?”