England went into one hard lock stop the spiraling COVID-19 hospital stays and relieve the health system. Prime Minister Boris Johnson said the new lockdown would last at least seven weeks, but it is safe to assume that this is the case in many hospitals close to capacityIt stays in place for as long as necessary to minimize the risk of overwhelming the NHS.

In the meantime, the government is betting that the House will step up its vaccination program to offer a vaccination first COVID-19 vaccine dose to 13.8 million people by mid-February, including up to all over 70s. Not everyone who is eligible will take one, but we can given the UK normally expects quite a high level of acceptance comes close To meet the World Health Organization’s goal of including 75% of the flu vaccine in those over 65.

Assuming these ambitious vaccine goals can be achieved, how much pressure is there on hospitals to ease?

Public Health England numbers show that people over 70 are at highest risk of being hospitalized due to COVID-19. People aged 85 and over are particularly at risk. Their hospital risk over the past two months was roughly twice that of 75 to 84 year olds, four times that of 65 to 74 year olds, and more than ten times that of groups under 65.

Our own calculations that combine Public Health England figures The Office of National Statistics population figures show that around 60% of new admissions of COVID-19 in December 2020 were from patients over the age of 70.

According to preliminary data For COVID-19 hospitalized patients who have not been admitted to the intensive care unit, older patients stay in hospital longer on average – those over 75 years of age stay eight to ten days compared to six days for patients aged 50 to 64 years. This means that older patients make up an even larger proportion of patients in the hospital than those originally admitted.

Therefore, prioritizing protecting this older age group from infection with vaccines can greatly reduce the pressure on hospitals.

The most heavily used hospital areas were intensive care units bursting at the seamsespecially in London and in the South East despite capacity expansions.

As with general hospitalizations, immunizing most people over 70 will help relieve these pressures. However, this effect is less in intensive care units for two reasons.

First, ICU patients with COVID-19 have an average age of only 62 years; less than a third of these patients are over 70 years old.

Second, ICU patients are also in hospital for much longer on average, roughly twice as long as COVID-19 patients without an ICU. This means that vaccination admissions will take longer to reduce pressure on ICU patient numbers. 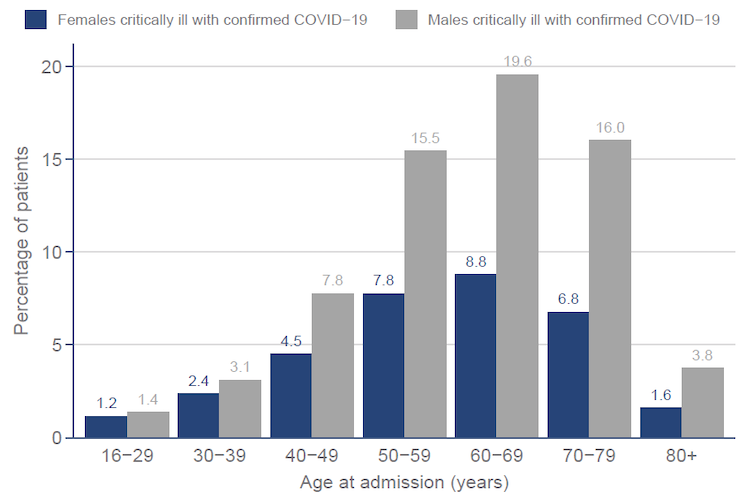 Therefore, it may not be possible until people in their fifties and sixties are immunized, and even then, there will be delays due to the long length of stay of many patients in need of intensive care.

Will the ban take effect?

It is hoped that the new lockdown regulations, including school closures, will give the vaccination program time to achieve these desired effects. The Prime Minister has indicated February 22, after the mid-term break, as the first possible time for the schools to reopen. How likely is it that this goal will be achieved?

The four-week lockdown in November in England saw one Flatten in hospital numbers with no significant decline. It’s unclear whether the current easing, which is tougher, will be enough to reverse the recent sharp surge in infection rates – which is believed to be due to a new variant of COVID-19 – in the seven weeks ending February 22nd.

At the start of the lockdown in November, the number of COVID-19 patients in the hospital was only 10,994. Starting from a worse position, this could take longer than before. With the initial lockdown, restrictions that started in late March weren’t lifted until early June.

It is hoped that vaccination for most people over 70 when first introduced will ease pressures on hospital capacity alongside the lockdown, thus speeding up the return to manageable levels, although there are time lags at each stage.

It takes at least a few weeks for patients to develop immunity to vaccines, and a drop in hospital admissions lags behind the drop in infection rates from vaccination. Any decline in the number of patients actually in hospital (especially those in intensive care) will lag even further.

The proposed February 22nd date to ease the lockdown and opening of schools seems optimistic. Based on the experience in November and in view of the current development, the hospital numbers and the pressure in the intensive care unit will not have decreased significantly by then, even in the best case. Reopening schools and relaxing other measures in mid-March seems more plausible.