ashington, – On the last morning of the Trump presidency, the city was quiet.

At 8:30 a.m. amA crowd had gathered outside the Cathedral of the Apostle Matthew where Joe Biden was to go to mass. A flood of police vehicles blocked the entrance, hoping to see the soon-to-be president, but there was a sense of anticipation – a desire to be part of something on this momentous day. One woman wore a Biden Harris mask made entirely of sequins. Another woman’s mask read simply “The Future”. An elderly gentleman said quietly to himself, “It is really remarkable.”

On every other day of inauguration – especially one when a democratic government is welcomed – D.C. Residents poured out of their homes to take part in the festivities, like on the first day of spring at the end of a long winter. But this year a deadly Capitol riot and a runaway pandemic had combined to make a public celebration impossible. Under threats of further violence from the far right, the district and the President’s Inaugural Committee urged people to celebrate at home and virtually attend the swearing-in ceremony. So the capital was a ghost town; Aside from joggers, strollers, and the occasional Biden fanatic, Washington’s wide boulevards were empty.

What was in abundance were security guards: police, secret service, homeland security, TSA and more. A National Guard contingent of around 15,000 soldiers mobilized after the January 6 attack on the Capitol had grown to over 25,000 in recent days. Armed with M4s and pistols, guardsmen were everywhere in the city center. They stood in packs on barricades in the middle of the street and in front of an open Starbucks. Some soldiers stood next to homeless camps – a picture of America, really, at a time when millions have lost jobs and housing due to the coronavirus pandemic. 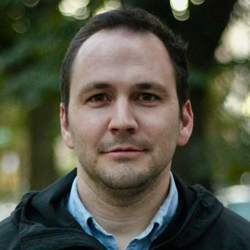 Heavy fences and security checkpoints dominated the normally busy streets. In the end, there was no violence and the few Trump supporters I spotted were subdued. They wore MAGA gear and were still waving Trump 2020 flags. They looked lost.

At Black Lives Matter Plaza, facing the White House and an hour before Biden’s swearing-in, the crowd was small but lively. A speaker played Marvin Gaye, Simon & Garfunkel and Elvis Presley. A woman in a Black Lives Matter t-shirt flew a little kite with the words Mrs. vp. Her mask, black with pink letters, read the same. Through steel barricades, past a handful of soldiers and police officers, one could still see the hundreds of homemade signs on the fence that was erected around the White House during the historic protests against racial justice that summer. Bye Donone read. Earlier that morning when Marine One took off from the White House lawn with Trump – he was on his way to Andrews Air Force Base and then to Florida – the people in the square had been dancing.

Since most of the people stayed at home, there were more journalists in funny circumstances than civilians. I listened to a woman who had come to the inauguration from Boise, Idaho, interviewing reporters from at least Japan, France and Romania. (“Joe Biden will unite our country,” she told everyone.) Convincing images were in short supply for photographers, so even the smallest fascination – a woman burning sage and blowing bubbles – attracted a dozen or more professionals. Degree cameras to capture the moment. In the small group of journalists I became friends with, we took photos of journalists who were taking photos. One, Jack Crosbie, a writer for Discourse Blog, remarked that he couldn’t believe he put body armor on it.

At the intersection of F Street and 14th Street Northwest, reporters with cameras and microphones formed a wide semicircle around a young woman in a MAGA hat who claimed the attack on the Capitol was an inside job initiated by Antifa. Even when Trump was gone, the press couldn’t help but draw attention to proven false nonsense.

One block from here, on 13th Street and just before noon, several hundred people were waiting to be checked for the entrance to Pennsylvania Avenue, where they would later cheer on the new president’s motorcade. More than a mile away the dedication ceremony was in progress; People in line turned to their phones. Through so many tiny speakers, the audio streams of which were easily out of sync with the others, we heard Kamala Harris become Vice President and then Joe Biden, the 46th President of the United States. “It’s over!” someone cheered. “It’s over!”

“That was great,” said a tall man in a gray sweater. “And we were here to see.”

“Kind of,” he added, taking a look at the buildings on either side of the street.

And so the Biden Presidency began for the people of DC: Most of them were at home. Some were in the streets outside of the Capitol. Almost no one was able to attend in person – in some ways one last thing that Trump’s tenure as president took over.

But something was also gained, in a collective sigh of relief. Those who have lived in DC know that the person in the White House can have a profound impact on the mood of the city. For the people I know, it means not only the grief so many Americans have felt, that knot in our souls that could not be untied, but also the sickening knowledge that we are airing with an avowedly racist and determined air cruel president and the harmful have shared people like Stephen Miller, Jared & Ivanka, William Barr, Betsy DeVos, Mike Pompeo and everyone else. Biden and Harris cut out their work for her. But on Wednesday that knot loosened slightly and the city suddenly felt cleaner.