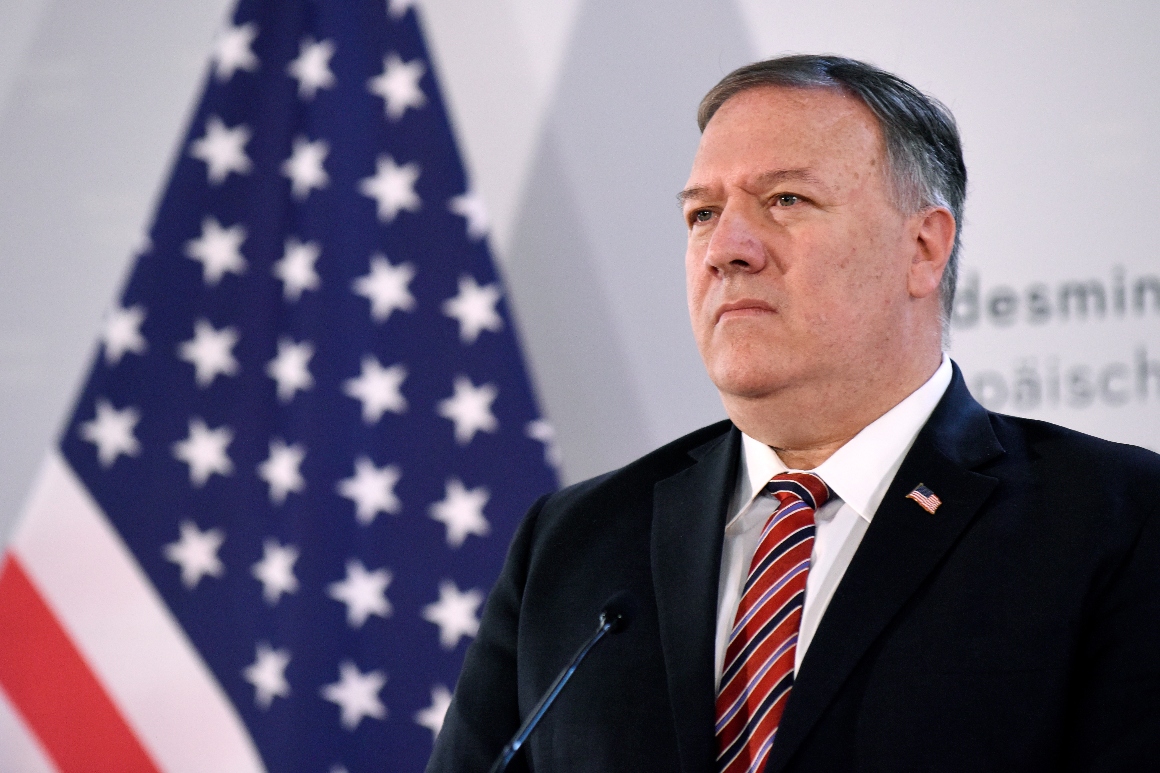 It’s not clear who’s been invited to the upcoming dinners, which previously were not listed on Pompeo’s public schedule and thus were largely unknown to the public. The current guest lists are being closely guarded by a small group of State Department officials as well as by Pompeo’s wife, Susan, who is deeply involved in organizing the dinners.

Three of the upcoming dinners are supposed to be held at Blair House, the famous presidential guesthouse close to the White House, as opposed to their usual location: the State Department’s diplomatic reception rooms. Monday’s dinner, too, was supposed to be at Blair House, but that fell through because visiting Israeli Prime Minister Benjamin Netanyahu is expected to be staying there.

The Pompeos are currently under investigation by the State Department inspector general’s office over whether they used department resources for personal reasons. State Department legal advisers signed off on the dinners, but critics suspect the guest lists — which NBC News first reported included major GOP financiers and media luminaries — are designed to help Mike Pompeo build his political network and donor base ahead of potential future runs for office.

Asked for comment Sunday on the resumption of the dinners, the State Department’s public affairs office sent along the same statement it has been using for months to respond to inquiries on the topic.

In it, State spokesperson Morgan Ortagus defends the events as a way to promote the mission of the State Department among influential figures in the “finest tradition” of U.S. diplomacy. Ortagus also promises that the dinners would continue.

Pompeo, meanwhile, has dismissed accusations of wrongdoing against him and his wife. His allies have argued that it’s perfectly normal — desirable, even — for a secretary of State to engage a variety of individuals in the department’s diplomatic work.

But the return of the dinners has led to some grumbling among State officials.

Although the dinners usually are intimate affairs, they require significant staffing, and department employees are worried about the public health implications given the Covid-19 crisis.

The pandemic has killed nearly 200,000 Americans, with hundreds still dying each day, but President Donald Trump and his aides have been downplaying the crisis ahead of November’s presidential election. The caseload has shrunk in Washington, D.C., but city rules still urge people to practice social distancing and mandate mask-wearing, including inside buildings open to the public.

It’s not clear whether those rules apply to federal facilities such as Blair House or the State Department, whose workforce is still largely operating remotely.

Some State Department employees also said they still question the diplomatic value of the dinners. They noted that those held in the past included hardly any State Department officials beyond the secretary, and few foreign diplomats.

Instead, invitees were generally prominent figures from well beyond the foreign policy realm, including many from the corporate or entertainment and media worlds, as well as conservative lawmakers and thought leaders. (Robert Allbritton, the publisher and owner of POLITICO, attended a Madison Dinner.)

One State Department official called the return of the dinners “frustrating.”

“Dozens of department employees who support these dinners, from security officers to catering staff who prepare the food, facilities management and protocol staff, do not have the option to work these events remotely or turn down an assignment,” the official said.

At least two of the upcoming dinners will be held during the main week of the United Nations General Assembly, although that gathering is largely virtual this year. Those dinners are planned for Sept. 23 and 24.

Monday’s dinner comes as Bahraini, United Arab Emirates and Israeli officials are heading to Washington for a White House ceremony recognizing the two Arab countries’ decision to normalize relations with Israel. It’s not clear, however, whether any of those foreign officials have been invited to a Madison Dinner.

A fourth such dinner may take place on Oct. 20, the two State Department officials said.

The dinners usually have been held in the State Department’s swanky diplomatic reception rooms, in particular one named after James Madison.