In July 2019, as the 2020 presidential election loomed large and an enduring pandemic was inconceivable, a series of billboards targeting a candidate in the race appeared across Iowa. Such a series isn’t out of the ordinary for the state during an election year, but the billboards in question alluded to a battle most Iowans weren’t aware of—one that was hyper-local to New York City and targeted the city’s mayor , Bill de Blasio.

“What are you doing in Iowa? Go back to New York and meet with us!” one billboard in Cedar Rapids, Iowa, adjured the mayor. Ominously signed “from the residents on Billionaires Row,” the display served as a stark reminder of not just de Blasio’s critics but also an ongoing clash between some of the city’s leadership and the West 58th Street Coalition, a small group of wealthy New York residents . The reason? In short, the establishment of a shelter for homeless men in the Park Savoy Hotel on West 58th Street, which happens to be nestled between some of the priciest real estate in the city on a street known to some natives as “Billionaires’ Row.” So it’s over 1 to as the city’s most expensive street largely because of billionaire Michael Dell’s 2014 purchase of a penthouse in the One57 tower—situated just next door to the shelter—for $100 million. At the time, it was the most costly piece of real estate ever sold in the city.

The shelter, which opened in November 2021 after a four-year legal battle between the city administration and the area’s residents and business owners, was part of a years-long initiative by de Blasio to address homelessness in the city. Alongside other interventions, the former mayor vowed to reduce the number of people in shelters by 2,500 over five years through a combination of homelessness prevention efforts and rehousing programs. While the number of families seeking shelter has seen a decrease of 11 percent since 2014, when de Blasio took office, in part due to the moratorium on evictions, the number of single adults seeking shelter increased from 10,000 in 2013 to over 15,000 in 2021.

The significance of the shelter’s location cannot be overstated. Historically, communities of color have hosted more than their share of shelters, while majority-white, more affluent neighborhoods have hosted very few if any. As the New York Daily News reported in 2017, de Blasio “promised to try and distribute the burden across all neighborhoods, whether rich or poor.” The administration also said it would try to keep unhoused residents in their communities of origin, but advocates have criticized that plan for overlooking that those same communities often lack the resources needed for stability, including employment opportunities and reliable transportation.

Therefore, moving men who were either employed or seeking employment opportunities into Midtown, where basic needs could be met, seemed like a perfectly plausible—if not overdue—solution. But not to some of the residents who opposed it. Originally scheduled to open in spring 2018, the Park Savoy shelter quickly found itself at the center of a very public and pricey legal battle. Steve Banks, then-commissioner of the Department of Social Services, called it “the longest and the most well-funded litigation” against a shelter in New York City.

The billboards, which were reported to have cost the coalition a whopping $100,000, were only one strategy deployed by the group in their efforts to try to prevent the shelter from opening. It filed a lawsuit in 2018, arguing that “[not] only is the building unsafe, but crime and loitering” would lead to “irreparable injuries.” And the group reportedly paid $287,000 to lobbyists to advocate for their cause, according to the city.

But after a state appeal court rejected the lawsuit in May 2021, the shelter quietly opened in November, amid a raging pandemic.

When the city shut down in April 2020, the de Blasio administration moved thousands of people within the city’s shelter system to private, largely empty hotels to reduce the spread of the virus. But a year later, as vaccines became more accessible and infections decreased, de Blasio reopened the city and, in a move criticized by housing advocates, swiftly transferred many homeless residents back to overpopulated shelters where isolating and harm reduction is made all the more difficult. Today, though the city’s data doesn’t reflect the full extent of the crisis, because, as the city reported, they do not include the numbers of people in faith-based, youth, and overnight drop-in centers, as well as those who sleep on the street, it’s estimated that some 45,300 people sleep in city shelters, including 16,500 single adults and 14,600 children.

Housing advocates like Jacquelyn Simone, policy director of the Coalition for the Homeless, say more permanent housing solutions are needed. “We currently have a shelter system that’s bursting at the seams,” said Simone. “If we had more of a focus on homelessness prevention and moving people out of shelters more quickly into permanent housing, we can reduce the size of the shelter system and instead, focus on high-quality shelter with well-funded and transparent providers. It all goes hand in hand.” 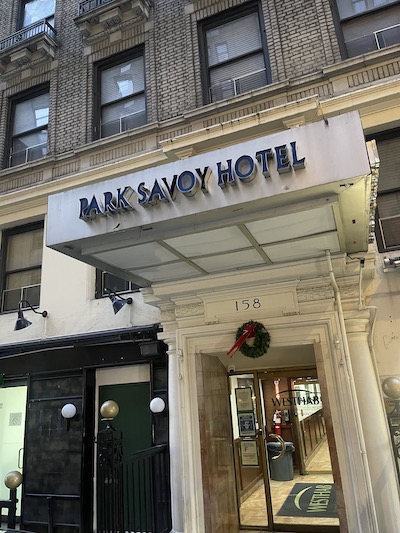 The homeless shelter at the Park Savoy Hotel opened in November after what the Social Services commissioner called “the longest and most well-funded litigation” against a shelter in New York City. (Photo: Westhab)

RI Nightingale, president and CEO of Westhab, an affordable housing nonprofit that operates the shelter, wasn’t surprised by the community’s criticisms and later legal action, but noted that such a well-funded effort—and one led by citizens—isn’t that common.

“I don’t think it was a huge majority of the community, but this was fought through legal means that were difficult to overcome,” said Nightingale. “There have been communities that have been more unified against a shelter, but maybe not with as well-resourced a legal challenge.”

“Unfortunately, we often do hear of resistance when shelters open throughout the city,” echoed Simone. “Whether that opposition leads to litigation often depends on the resources of the neighborhood, right? A wealthier neighborhood might be able to marshal hundreds of thousands of dollars for a lawsuit that will ultimately be unsuccessful.”

Though the shelter has opened, the West 58th Street Coalition’s site is still active and accepting contributions to “cover the costs of devising and promoting alternative shelter proposals and locations.” The group, which has been silent on its social media accounts since June 2020, did not respond to a request for comment by publication time.

As of January 18, 16 occupants were living at the hotel. Nightingale thinks it’s important, too, to stress that all of the individuals are working or actively seeking job opportunities, since many critics of the shelter have raised objections about it while perpetuating dehumanizing tropes of unhoused people.

“The cost of living in New York City, as we all know, is crushing to everyone. There are individuals who are employed full-time that fill essential jobs that still can’t afford [housing],” said Nightingale.

One of the first residents to move into the Park Savoy, Arthur Gough, is a housekeeper and cook at a nonprofit in the city. Gough, who has now lived at the shelter for the past month and a half, calls the Park Savoy a “safe haven.”

“I’ve been around the shelter system in the city,” said Gough. “I know what the inside looks like, and it’s not a walk through the park. It’s unimaginable.”

Prior to Gough’s stay at the Park Savoy, he’d been funneled through the city’s shelters for almost a year, being placed wherever there was availability.

Gough asserts that he hasn’t witnessed any outward displays of malice or discomfort from neighborhood residents. He’s also quick to highlight the purpose of the shelter and that the residents are working to claim an agency about their lives that’s been lost.

“Everyone deserves a home, I’m sorry,” said Gough. “But those that stay here are chosen for this sort of environment, not because they deserve to be near Central Park, but because this is a place for people that are trying to get back into mainstream society.”

As of now, Nightingale says the transition has gone smoothly, with some of the residents even asking how they can be of help—whether it be coordinating holiday baskets for the men staying at the shelter or connecting them to employment opportunities. Local fast-food restaurants also have given residents shelter gift certificates. Nightingale hopes that going forward, they’re able to establish partnerships with the community so that the residents at the Park Savoy are able to quickly gain employment and find their own permanent living space while their neighbors can be “a part of this success story. ”

“Based on the success that we expect and the kind of neighbor we intend to be, I think we are going to change perceptions,” said Nightingale. “But I will say, now that we’re open, [the neighbors] do understand that it’s in everyone’s best interest now to figure out a plan to coexist.”