A woman who discovered her brain is “slipping” into her spine after collapsing up to 20 times a day, being left periodically deaf and blind and in such agony she wanted to “rip” her own head off, says reflexology has changed her life.

Jennifer Sullivan, 35, was forecast to be wheelchair-bound after being diagnosed with Chiari malformation in 2012, having “baffled” doctors for two years with a range of terrifying symptoms.

Determined to fight her alarming condition, which at one point left her with no feeling from the chest down, she started having reflexology massages, which apply pressure to the feet, hands and ears – a discipline she has now trained to perform – and she says they have restored her movement.

Jennifer, who lives in Dulwich, south east London, with her husband Jacob Sullivan, 41, a marketing director, recalls how her symptoms began in 2010 when she randomly collapsed on the stairs, but soon escalated so that she was in agony, saying: “I used to grab my skin, as I wanted to rip my head off.

“It started happening up to 20 times a day.

“I was passed on to every hospital around London, but no one could diagnose me.”

Finally diagnosed with Chiari malformation, an incredibly rare condition where the lower part of the brain pushes down into the spinal canal, after she sent her MRI scans to a friend’s neurologist father, having a name for what was wrong was still no instant fix.

Three brain operations followed, but Jennifer insists the more unconventional treatments she turned to have been integral to restoring her quality of life.

She said: “I want people to understand they don’t have to accept what they’re told, you can improve your own life.

“I’m so thankful to have had the brain surgeries, but they left me dealing with a condition so debilitating and I think reflexology got me out of that. 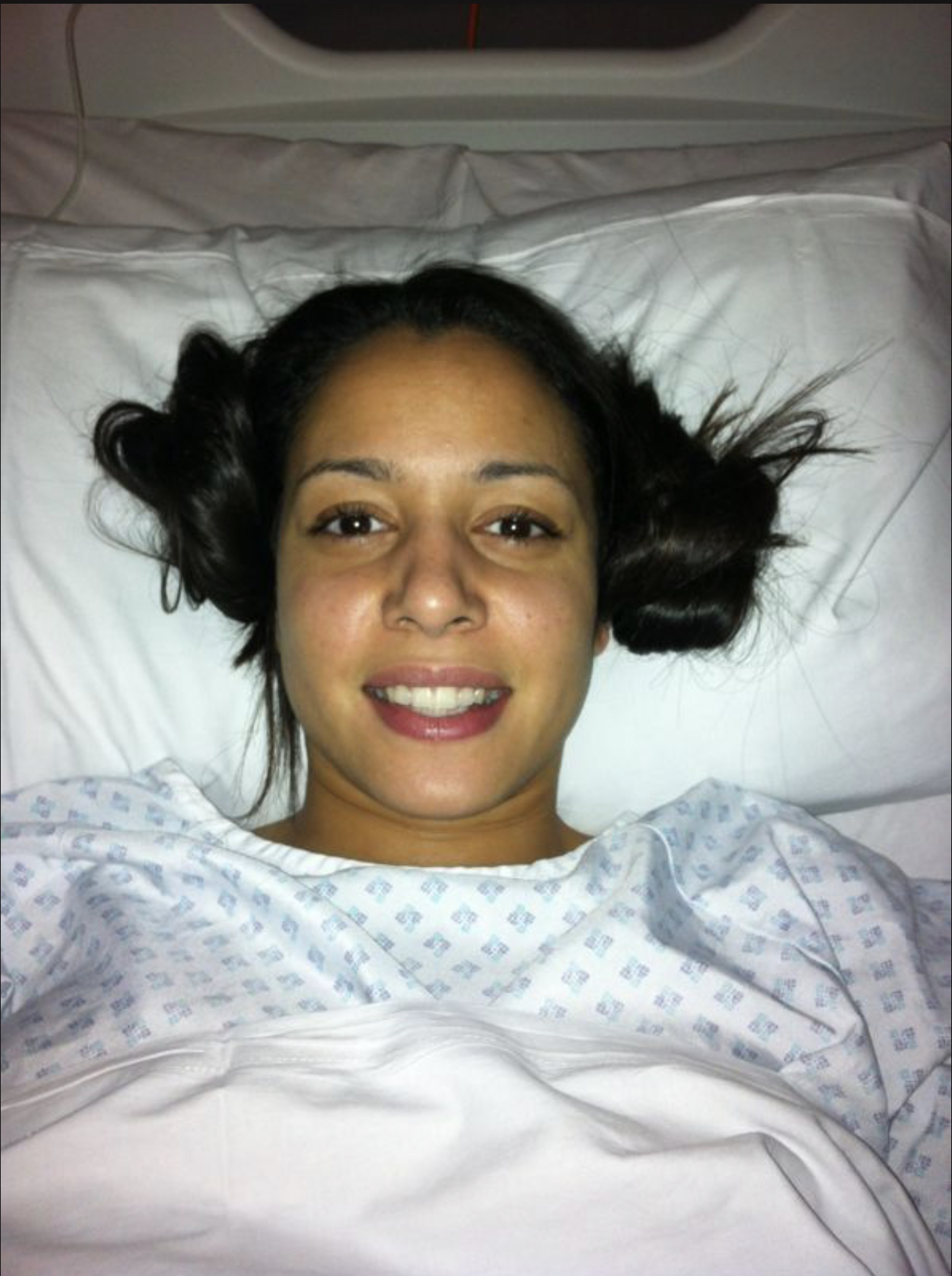 “Learning about reflexology and removing toxins in my life have allowed me to find some normalcy, and that’s why I’m not in a wheelchair like the consultants said I would be.”After Jennifer’s first collapse walking up the stairs in 2010, the same thing happened a few weeks later, when her alarm bells started ringing.

Given various tests after visiting her GP, nothing was found.

And, by 2011, she had grown used to her weird symptoms, which also triggered short periods of sight and hearing loss.

Continuing to see GPs and specialists across London, they were baffled, as her symptoms escalated and she was having episodes up to 20 times a day.

She also started experiencing excruciating pain, which she said felt like someone had been “squeezing” her brain.

I started to think it was all in my head and I was going crazy.

Just 23, despite appearing to be fit and healthy, she became a regular at A&E and would spend weeks in hospital, where doctors would observe her.

One theory was that she had a spinal leak, caused by a tear in her spinal cord, but nothing was found.

Jennifer said: “As something happened to me, I’d go into A&E, I’d stay in the hospital for a few weeks and they wouldn’t know what it was.

“After tests and scans, they thought it was a slight tear in my spinal cord, but they couldn’t find anything.

“They experimented with lots of different things to see if the symptoms would improve, but things continued to get worse.”

Jennifer even questioned whether her symptoms were psychosomatic, as her mental and physical health deteriorated.

She said: “It was terrifying that no one could find what was wrong.

“If they found something we could work on it, but I started to think it was all in my head and I was going crazy.

“Then, when I started passing out and losing feeling, it was so scary.

“I lived in constant pain for years.”

Jennifer suggested trying a blood patch – a procedure in which a small amount of blood is injected into a patient’s epidural space to stop a leak.

To her amazement, the procedure appeared to work, as just days later she felt completely fine and was pain free. 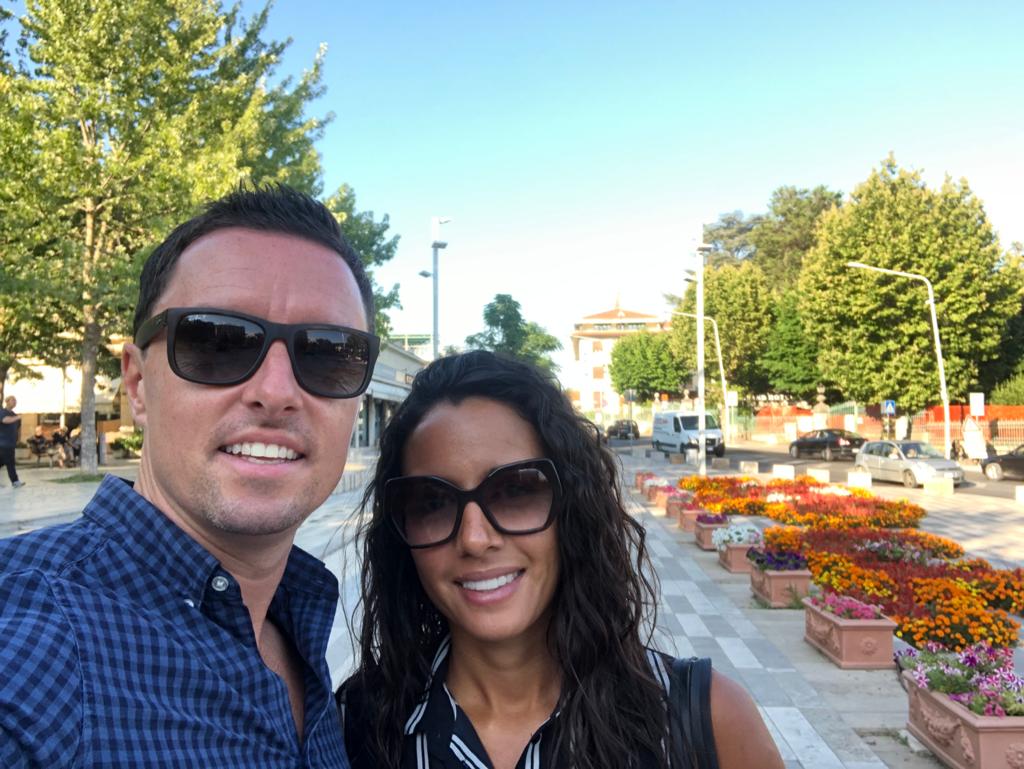 She said: “The blood patch seemed to work instantly, it was just incredible.

But the magic wore off after a few months and Jennifer quit her job and moved in with her mum Anne Mitchell, 64, a retired interior designer, on the Isle of Wight where she grew up, so she could feel safe.

Landing a job as a carer, still in her early twenties, she continued to spend weeks in hospital, but was determined to learn to live with her mystery condition.

She said: “I learned to live with it but, without a diagnosis, I was just lost.

“I was 23, but couldn’t think about my future. I was worried I wouldn’t survive.

I had stabbing pains one morning walking from the tube and passed out in the middle of the street. That was normal for me, so I carried on and went to work.

A few months into her new caring role, which she loved, she was once again plunged into the deep end after a patient fell and she instinctively dropped down to catch her.

Feeling a “tweak” in her body, Jennifer immediately knew something was wrong and went home, waiting anxiously for her symptoms to flare up.

She said: “Everything had been fine for three or four months, then a patient fell and when I caught her, the pressure triggered a tweak in my body and soon after, the symptoms began again.

“By the time I got home, my hand was numb and, feeling like a dog that needs the vet, I went back to the hospital.”

Rushed to St Mary’s A&E on the Isle of Wight, where she was given morphine to deal with the pain which nurses said sounded “like she was in labour,” she was then transferred to Southampton General where, after scans, doctors thought another blood patch would be the best solution.

Following seven days in hospital, where she was not allowed to move, feeling better, she was discharged.

Resigned to the prospect of having blood patches every few months, Jennifer moved back to London after the summer of 2012.

Continuing to work in sales and marketing for a property developer – the career she had given up due to her condition – she also met her husband.

She said: “I was holding down a full-time job. I just wanted to get on with it, and I got used to the pain.

“It started to get more intense. I felt like my head was too big for my body, it was very strange.

“I had stabbing pains one morning walking from the tube and passed out in the middle of the street. 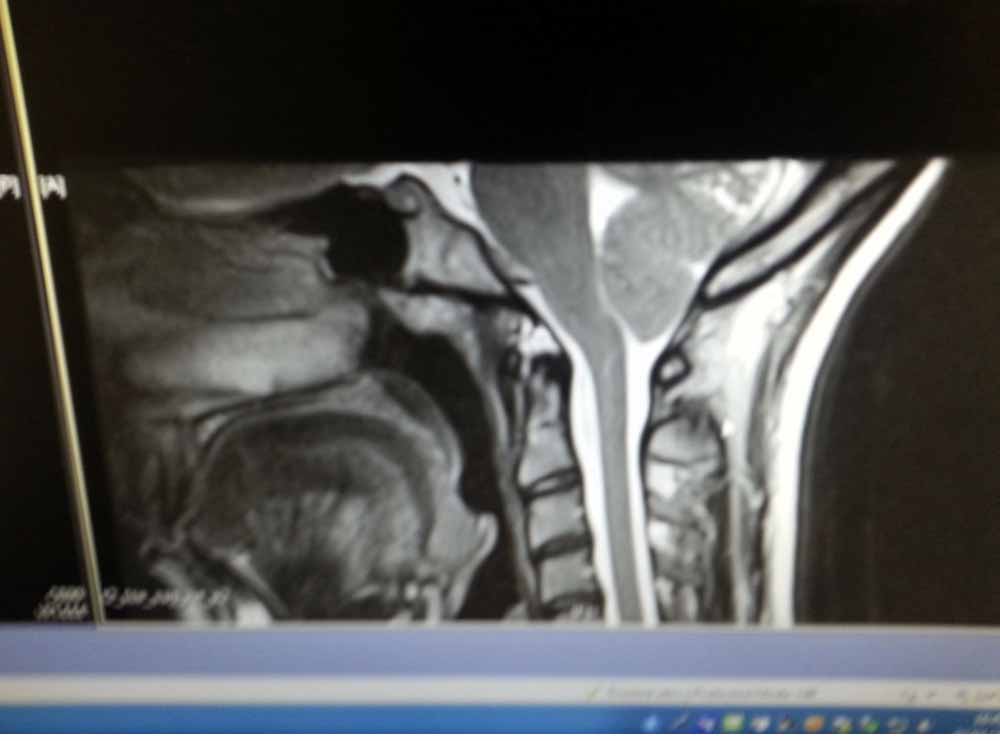 “That was normal for me, so I carried on and went to work.

“Then my arm went numb and I lost my vision.”

But, in November 2012, after collapsing in the street again, Jennifer was rushed to Chelsea and Westminster Hospital’s neurology ward and given morphine for the pain, as her condition spiraled downwards.

Concerned, her sister Lisa Saidinayer, 41, a burlesque dance teacher, sought the advice of her best friend’s dad – a retired neurologist – who told them to contact his former student David Peterson, by then a neurologist at Charing Cross Hospital.

Finally, Jennifer was thrown a lifeline when she was transferred to his care, as he immediately diagnosed her with Chiari malformation after examining her scans.

Jennifer said: “I was begging him to help. No one knew what this was and it was getting worse and worse.

Before my surgery date, we had a big family party and it felt like the final supper. That really hit home for me, that it could be the last time I saw anyone.

Taken off morphine, having a diagnosis gave Jennifer hope.

She said: “When he told us what it was, I felt so much relief. I was really thinking that I had a mental problem and I was making it all up.

“When people tell you for so long that there’s nothing there, you start to believe it.

“So it was such an emotional time. I was so relieved I wasn’t completely crazy.”

Just a month later in December, she was given potentially fatal surgery to cut out a piece of her brain. 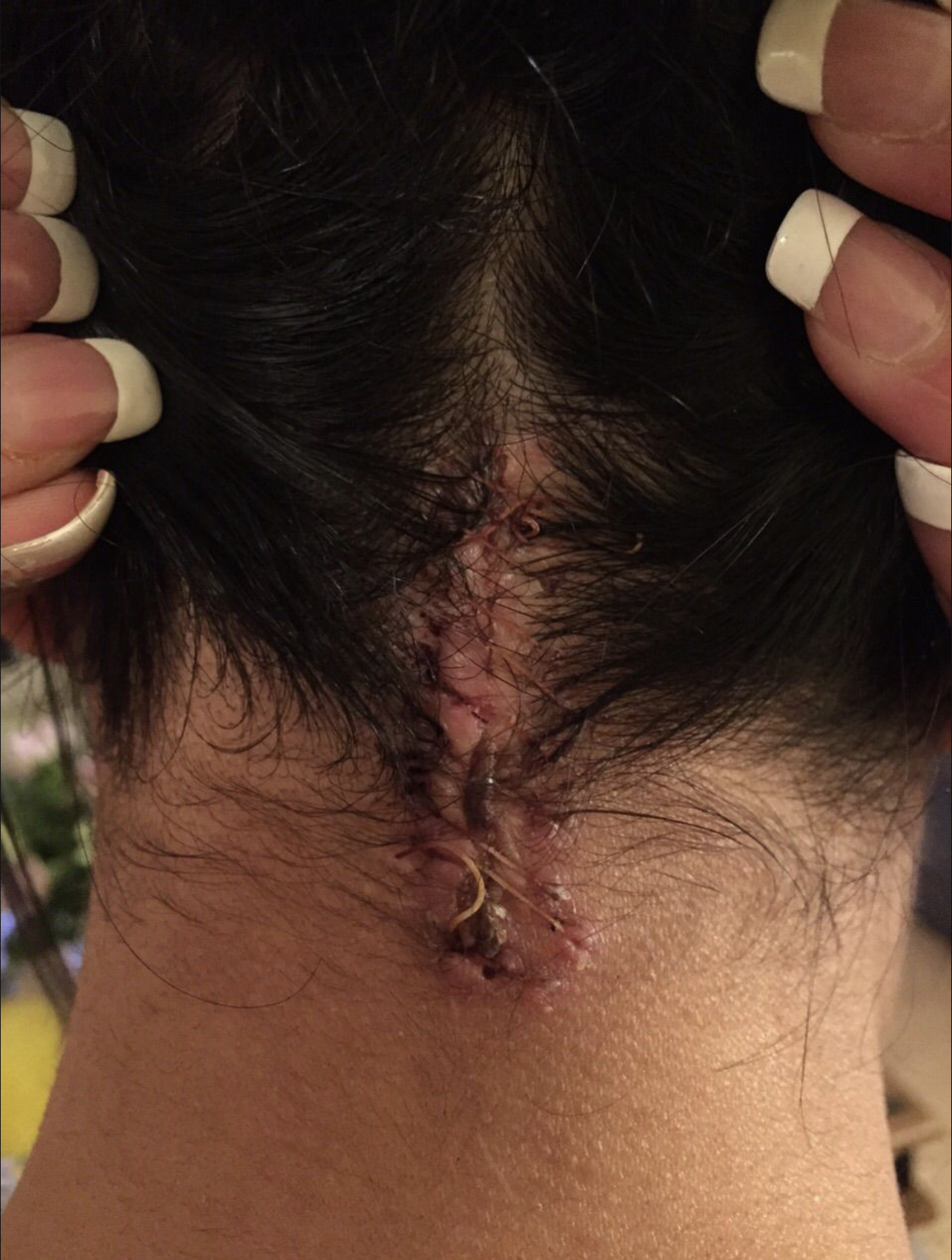 Jennifer has had three surgeries to treat her Chiari Malformation (Collect/PA Real Life).

Jennifer said: “Before my surgery date, we had a big family party and it felt like the final supper.

“That really hit home for me, that it could be the last time I saw anyone. That was quite hard.

“Doctors warned me there was a chance it could go wrong.”

The five-hour operation at London’s Charing Cross Hospital, called a foramen magnum decompression, involved cutting out the part of the brain that was slipping into her spine, before gluing it all back together.

Thankfully, Jennifer walked out of hospital after the life saving procedure.

But, in January 2013, her condition deteriorated again and doctors discovered she had a golf ball of liquid in the back of her spine, which needed to be surgically sucked out.

Going under the knife again, she spent a week in hospital where 10ml of liquid was being removed every hour.

She said: “It felt like my brain was falling out of my head.”

Recovering and leading a “normal” life after surgery, she was careful to avoid bending, or overstretching herself.

But in 2014 she fell while skiing in France and found herself in the hospital once again when she returned to the UK.

And she was dealt a further blow when she was diagnosed with syringomyelia, a fluid-filled cyst within the spinal cord, which is incurable.

More surgery followed to remove the liquid from the back of her head and after a week in A&E, miraculously, she once more walked out of hospital. 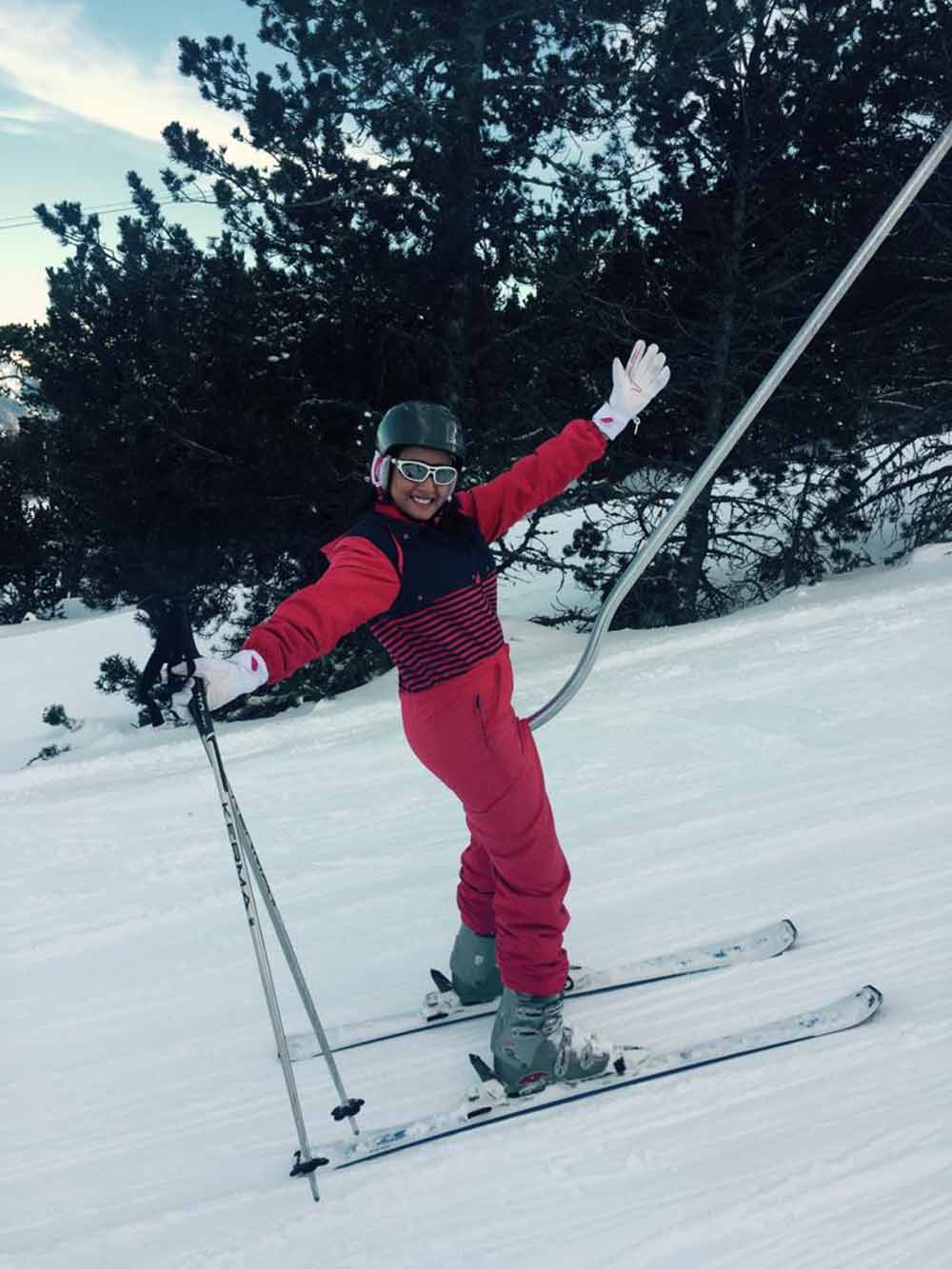 Jennifer said: “Overnight the fluid disappeared, the golf ball just went and I was fine. I was out of intensive care.

“They said it was a miracle.”

But in 2018, Jennifer lost all feeling below her chest and was rushed to hospital again due to nerve damage, which had made her brain unable to read messages from her nerves.

Still she rejected forecasts that she would be wheelchair-bound forever and started to remove toxins from her everyday life – from food to cosmetic products – also having reflexology massages every week.

Now able to walk normally, Jennifer has gone from feeling suicidal and depressed to feeling happy and hoping she can inspire hope and courage in other people facing similar challenges.

She said: “All the feelings they said I’d never have, I got back.

“People underestimate how much power you can have over your own situation.

“I will live with Chiari malformation for the rest of my life, but I know my body and my limitations.

“And I wouldn’t have been able to get through the difficult times without my family’s support, and I feel great now and that makes me very pleased.”

Even after being diagnosed, living with such a difficult condition without any fellow sufferers to compare notes with, has been incredibly isolating.

Jennifer said: “I honestly wanted to die, as I felt so alone.

“But now I want to raise awareness of this condition, so it’s less of a lonely process for other people.

“I want people to hear a success story like mine, to give them hope, so they can see it’s possible to lead a normal life.”