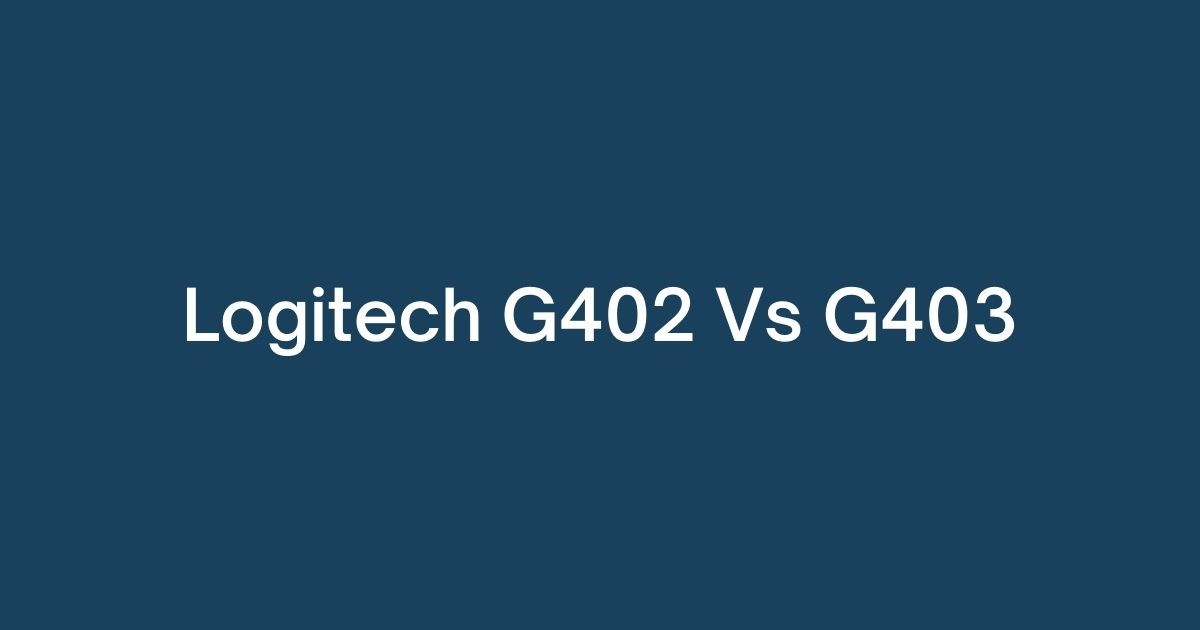 Today We will be doing a comparison between Logitech G402 VS G403 to find out Which is better for Gaming and Why.

For this review we will consider the following aspects:

As you saw above, there is a significant amount of difference between Logitech G402 vs G403. If you don’t know, (DPI stands for Dots per inch). The G403 Prodigy outperforms the G402 here.

The Logitech G403 has 12000 DPI with 400 IPS which is ideal for any gamer who likes to switch between different DPI to find their best choice.

The Logitech G402 here features only 4000 DPI along with 500 IPS which can be considered as okay for FPS and action games. However, when playing higher end titles, you might start feeling the differences where this mouse lacks.

The logitech G403 and G402 have one of the finest optical sensors available in the market and thus provide you with a superb gaming experience that you are sure to love.

If you want to know, the G403 by Logitech is equipped with PMW3366 which is considered as one of the highest rated optical sensors in the industry due to its accuracy and preciseness.

If you have a look at the Logitech G402 Hyperion Fury, it has got a Fusion Engine Hybrid sensor which is considered among the fastest optical sensors in the gaming industry.

Overall, there’s not much difference here as both of the mouse have amazing performance and an absolutely impressive response rate of 1 ms which is blazing fast and We love it!

If you have a word with us, we will say both the champs, Logitech G403 and G402 are have the best optical sensors in the market and it’s no brainer that they will provide us with an amazing gaming experience! So here G403 vs G402 has a tie.

Well, lets admit it. Gaming mouse without an RGB light is incomplete. Both the G403 and G402 are fortunately equipped with lights.

The G403 is however a winner here. The G403 Prodigy features the next-gen ‘LIGHTSYNC’ technology. This means that it offers over 18.6M colors and syncs them accordingly.

The G402 on the other hand is equipped with normal RGB lights which can be customized and edited by installing and using the Logitech G HUB.

One thing that we don’t like about both the mouse is that the RGB lights have not been placed correctly. If you look at them carefully, these are placed facing your hand.

This means that whenever you play your hand will cover it. This is one of the biggest disappointments we have with Logitech mouse(s).

Prodigy weighs at around almost 87g (3.1oz) and without many questions Logitech G403 is one of the lightest and one of the best budget mice available in the market.

However, in case you are accustomed to playing with a heavy mouse you will still not have much to worry about. Why?

Kudos to logitech for that, we love it!

Weighing at 108g (3.8oz), the Logitech G402 is found in the mid-range price gaming mouse which is considered to be best suited for those gamers who are used to playing with an heavy hand.

However, one thing that you need to note is that G402 is somewhat long and if you don’t have long hands, you might face problems playing on this one. So, decide accordingly.

Much talk about the technicalities, let’s talk design:

The Logitech G403 Prodigy comes with a classic matte black design with rubber grips on the side. This grip helps to improve the firmness of your holding the mouse.

The G403 also features 6 customizable buttons. On top of that you also get option for adding extra weight on the bottom of the mouse. LOVELY!

We love the design of the G403 as it is user friendly and ideal for both right-handed as well as left-handed users.

If we have a look at the Logitech G402 hyperion fury, it has somewhat of a gamer/ unique design. The top of the mouse feels quite sophisticated and has 5 buttons.

The side of the mouse has 3 buttons. These 8 buttons are fully customisable and all the customisation options are available on the Logitech G Hub app.

One thing to note here is that G402 is more suited for right-handed gamers and if you are a left-handed user, then sadly this mouse is not for you.

Overall, the Logitech G402 is a decent mouse and the techy/gamer design is visually appealing as well.

The Logitech G403 is the new model here. And looking at the Logitech price trend, it clearly implies that G403 is more costly than G402.

There’s a noteworthy distinction between the cost of these mice and you’ll need to pay a decent amount to get your hands-on Logitech G403 Prodigy.

However, you won’t need to pay much Logitech G402. Both the mouse(s) Logitech G403 Prodigy and Logitech G402 Hyperion Fury are readily available on Amazon.

The Logitech G403 Prodigy is a respectable mouse with an classic vibe that is perfect for many newbies and gamers too.

Logitech G403 Prodigy additionally is furnished with mechanical mouse switches and they’re very solid so in case you’re searching for a long term gaming mouse,  it will surely not disappoint you.

Generally speaking, G403 Prodigy is a good deal and one of the best mouse and the most outstanding amongst other gaming mice accessible in the market.

The Logitech G402 Hyperion Fury is certainly among the top best gaming mice and can truly give their rivals a run for their cash.

G402 Hyperion Fury has the fatal and impressive specs and the running-stunning looks.

Be that as it may, 4000DPI is not exactly enough when playing some RPGs and we feel that Logitech should’ve offered something more here.

Taking everything into account, G402 is a decent mouse and it can possibly be your daily gaming mouse without much issue.

The usage may be an issue for some left-handed gamers. Other than that, G402 is definitely, worth your money.

Both of them are some good gaming mice and gamers have been using them from some time now. Logitech being the brand, you know that will not disappoint.

Both of these mice have their pros and cons but Logitech G403 is a better choice here as G402 Hyperion Fury offers less DPI and the G402 mouse is a little outdated as well.

So, if you’re looking for durable and long-lasting in terms of a  gaming mouse that can pull some long hours then G403 Prodigy is indeed one of the best investments you can make.